8
Once a powerful warlike race dwelling in the Blind Steppes, their insults to the Trow caused the stone giants to crush their race and enslave them to their bidding. The Oghres have been slaves to the Trow for a great number of centuries. -Oghre Description, Glossary, Myth III Manual

The Oghres were a powerful race who originated from the frozen wastelands of the Blind Steppes, which is north of Gower and the Trowlands. These creatures were once seen as savage humanoids during the Axe Age (also known as the Age of Darkness). They had such strong resentment towards the Trow of the south that the Oghres insulted the Trow's goddess monuments as "The Consorts of Nyx". This infuriated the Trow into sending a armed force of Iron Warriors into the Oghres homelands, tearing apart their fortresses, and enslaving these they didn't kill.

For thousands of years up to the Wind Age, these behemoths were forced to dig in the iron mines, and construct shines for the iron clad giants in honor of the goddess Nyx. There were several attempts by the Oghre to rebel against their slave masters, but the Trow would thwart them each time.

On October 1435 A.E., Myrdred freed the Oghres of the magical bonds that willed them into enslavement. He taught the Oghre Chief Moghbragga the Dream of Release so that they could carry out their rebellion against the iron clad giants. Several years of fighting later, the revolt would prove to be vain as the Oghres were slaughtered into extinction at the Valley of the Red Seal, their blood and bones permanently staining the valley walls. It was here that the Trow finally saw what they had been doing for thousand of years, realizing the cowardice with which they fought. It was from that day that the Trow rejected iron, vowing to never use it again.

Given their resemblance to the Mauls in Myth II: Soulblighter, it is imminent that they were the ancestors of the Mauls or they were a closely related race from the Blind Steppes.

"…in the slave-camps near Avernus, the Oghre have a fable passed down from generation to enslaved generation. The story speaks of a far-away land where the Oghre ruled themselves - and built homes and palaces not for their masters, but for their own. These ancient Oghre were adept scholars and great warriors who challenged all who would stand against them…"

"…Culled of any magical potential many generations ago, a few Oghre have learned how to resist the Trow's enslavement dreams. These Oghre have incited revolt in their fellow slaves for decades - but each uprising has been utterly smashed by the Trow overseers. But the seed of dissention has been sewn, and it is only time before the mighty Oghre rise up to reclaim their freedom…" 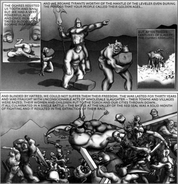 The Oghres as depicted in Tales From Myth: The Fallen Lords.

The creators of Myth III were unaware of the existence of Tales From Myth: The Fallen Lords, which depicted the Oghres of having humanoid features as opposed to the boar look resembling the Mauls.

Community content is available under CC-BY-SA unless otherwise noted.
Advertisement