Myth Games Wiki
Register
Don't have an account?
Sign In
Advertisement
in: Myth: The Fallen Lords, Characters, Light,
and 2 more 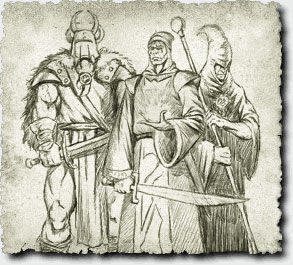 The Nine powerful sorcerers who lead the Legion against Balor and the Fallen Lords. Because of their years of training as magic-users and strategists, they tend to avoid melee combat but can be vicious when they have to be. Each Avatar carries a sword, and knows how to use it. Each Avatar has a unique magic ability. -Avatara Description, Cast of Characters, Myth TFL Manual

The Nine are the nine Avatara archmages who led the west during the Great War. Each was a master of the arcane dream magics but even they were matched or outclassed by the Fallen Lords.

The known members of The Nine were: Alric, Rabican, Maeldun, Murgen and Cu Roi. The other four were never officially named.

At the beginning of the war with Soulblighter, Alric was the only member to have survived. Rabican was killed when The Watcher's army attacked and Tharsis erupted. Maeldun was wounded when he lost Seven Gates to The Deceiver. Murgen and Cu Roi died when they freed The Legion from The Tain by shattering it from within. Two of the four unnamed members of the Nine were killed in a civil war resulting from The Head's betrayal, and the other two were presumed to be dead by the time of Soulblighter's rise to power.

Community content is available under CC-BY-SA unless otherwise noted.
Advertisement